This article is from Oct 24th 2014. Since that time the project has sold out and there is a growing waiting list.

Vancouver’s first co-housing project is finally under construction and presales are almost sold out, with only three units remaining.

It may be a first for Vancouver, but it’s a form of housing that’s been undergoing a quiet boom throughout the province. In B.C., co-housing communities are either completed or in progress in Burnaby, Langley, North Vancouver, Bowen Island, Nanaimo, Qualicum, Parksville, Courtenay, Roberts Creek, Nelson, Yarrow and Victoria, according to B.C.-based Canadian Cohousing Network. In Vancouver, on East 35th Avenue, land has been secured for another 30-unit project.

B.C. is leading the way in the co-housing movement, which has grown from the idea that community living is better for the environment, is healthier, and, in the long run, is more affordable. Outside of B.C., there are only 10 co-housing projects in Canada, including the ecoHousing Community that’s getting started in Toronto.

Co-housing is also booming because it’s a part of the emerging sharing economy, which includes car-sharing, ride-sharing, tool- and book-sharing and space-sharing services, such as Airbnb. In Vancouver, there’s even dog-sharing. The concept has been particularly embraced by West Coasters, in both Canada and the U.S., says Ericka Stephens-Rennie, who is one of the co-founders of Vancouver Cohousing.

She says co-housing is a growing phenomenon on the West Coast, and sees a lot more co-housing in Vancouver’s future.

“My own assessment of the situation is it matches up well with growing interests in the sharing economy. There is a lot of interest in that in Vancouver, Victoria and across the Lower Mainland and spreading down into Portland.

“You see the organization of people who are questioning whether or not they need to personally own everything that they want as a part of their life, or whether sharing is a better option. I think co-housing is one of those pieces. They’re asking, ‘Do I need to own guest rooms and a home office? Or can I share it?’” 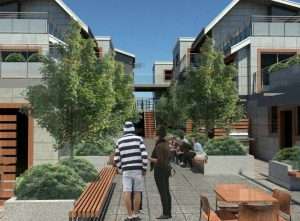 Co-housing is a Danish idea brought to North America by American architect Charles Durrett. Mr. Durrett, who is based in California, made the concept a reality for Vancouver when he and Vancouver developer Alan Forrester helped a group of cohousing enthusiasts make the project happen. It wasn’t easy. Previous attempts had failed usually because groups couldn’t compete with big developers for land.

Mr. Forester, who put the land deal together, estimates there had been at least 20 previous attempts.

“I had [the land] under contract and started working with Chuck. From there, the whole thing came together,” says Mr. Forester, who is no longer involved in the project.”I like to work on innovative projects, and without a doubt, cohousing is socially innovative.”

In July, a year and a half after they purchased three single family homes and had them rezoned for multi-family, they broke ground on the $15-million project.

Unlike the usual process of a developer purchasing the land, developing it and then selling it, a cohousing project is controlled and developed by the co-housers themselves, often from beginning to end. In the case of the Vancouver Cohousing project, the group has formed a development company that will dissolve not long after they take possession of their condo units in September, 2015. At that stage, they will form a typical strata arrangement. However, unlike the average condo strata council, they will have access to a shared 6,500-square-foot community space and every household will make decisions by consensus. 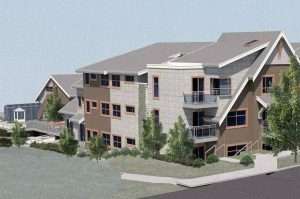 Residents also understand that they are part of a unique community, where they will contribute to each other’s lives instead of living in isolation. Residents will likely help each other with daycare, elder care and shared meals. Nobody is required to participate in such activities. But the idea is that purchasers are the sort of people who are open to helping their neighbours and creating a community, rather than living behind closed doors and barely making eye contact in the elevator.

Operating by consensus is not for everyone. After attending the required meetings, some people have bowed out, Ms. Stephens-Rennie says.

As well, there are misconceptions about co-housing. A big one is that people think it means a loss of privacy.

“People assume they don’t get their own kitchen or bathroom or living room. They assume they will be living in a dorm,” she says, laughing. “That’s not the case.”

Another fallacy is that co-housing is cheaper than regular market condos. In fact, the price can be slightly higher because buyers are purchasing a unit as well as a share of the common space.

“This is not below market housing – co-housing has an upfront cost that can be higher,” Ms. Stephens-Rennie says. “The affordability gains come from things that happen after [you buy in].”

For example, Internet will be cheaper because they’ve struck a deal with a service provider. Units can be smaller because residents won’t need the extra space for a home office or guest rooms. Office space and guest rooms will be provided in the common area. There will also be a shared laundry as an option, a multipurpose yoga studio and a place to play music. Community members have already started an inventory of all the tools and equipment they can share. 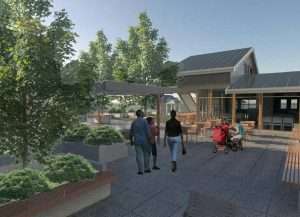 Lorne Mallin is looking forward to the yoga studio as well as jamming with his neighbours. Mr. Mallin, 67, bought a 510-sq.-ft. unit for $317,000. He’s downsizing from his current 800-plus-sq.-ft. rental apartment with an ocean view in high-end Kerrisdale. The former newspaper editor cashed out of his Point Grey house in 2006, but he had been searching for a co-housing project as far back as the 1990s. He even tried to get one going but couldn’t find enough willing participants. He’s willing to make sacrifices in exchange for the community-focused lifestyle.

“Mostly it’s living in community, knowing your neighbours well and not being isolated. Feeling supported. It’s about the opportunity to age in place. I have a daughter who may produce grandchildren at some point, but there are lots of surrogate grandchildren to connect with in this community.”

That said, he does wonder how the reality of shared living will play out. A litmus test for co-housing that is offered by Mr. Durrett is to imagine a pool full of kids screaming. Ask yourself if your impulse is to go check out the ruckus or walk away.

“My impulse would be to get out of there,” he says, laughing. “I can only take so much of kids screaming. It remains to be seen.”

Ms. Stephens-Rennie, her husband and young son currently live in a rental apartment. She looks forward to the multigenerational aspect of her future co-housing home, which she will own.

“I have a young son and his grandparents live in Ontario and the interior of B.C., and this way he can engage with elders on [a] regular basis.”

The residents have already formed a community since they started attending workshops and meetings in 2012. Because everything is by consensus, they are hammering out every conceivable concern that might arise. For example, one of the more senior purchasers expressed concern about placing garbage and recycling in the parking garage. She said it would be easier for her to pull the bins out to the lane.

“This was coming from an elder woman in our community who has had hip challenges,” Ms. Stephens-Rennie says. “A couple of the younger guys said, ‘Don’t worry. We’ll take care of that for you. You can participate in another way.’ In a multigenerational community, you can sort those things out.”

A major benefit for the seniors in the group is that the units are designed so they can age in place, with wheelchair accessibility throughout.

“When you have close-knit relationship with the neighbours, there’s this intentionality of saying, ‘I value you as a community member. We are going to figure out how to keep you in the community.’”

Vancouver Cohousing is holding a public information meeting on Monday, Oct. 27, at 7:30 pm at 802-5555 Balsam St. Details at vancouvercohousing.com.

This site uses Akismet to reduce spam. Learn how your comment data is processed.